Home » Family » What Nobody Told Me About Fleeing A Hurricane 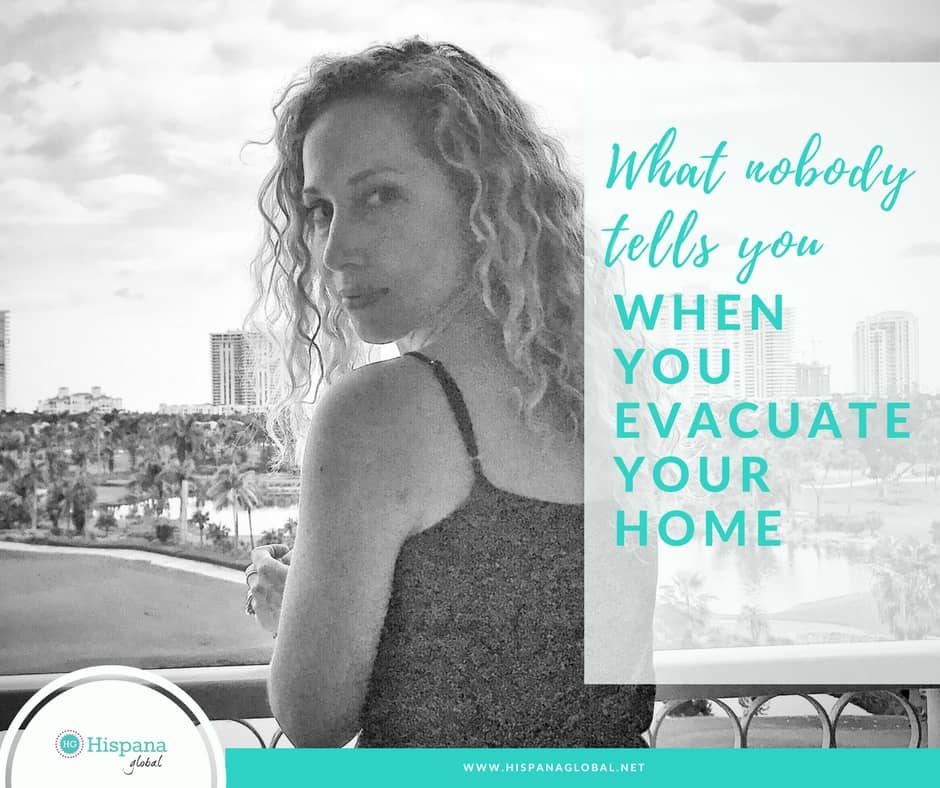 When I saw that hurricane Irma would become a category 5 storm, my mind went into emergency mode. I booked plane tickets using my miles to the only city I could (Dallas), researched hotels I could book with points, and then started packing. I felt the need to keep my family safe and even if I know storms can be utterly unpredictable, there was an inner voice that kept telling me to leave.

When our original flight got cancelled, dread filled me. Anxiety reared its ugly head. It made the whole situation even scarier. After two hours on the phone with American Airlines, a new flight opened up and we were able to get seats for my family. It meant leaving a day earlier, so all our hurricane preparations needed to be rushed. Even if we planned on evacuating, we had to shop for supplies because there was no guarantee our flight would take off. Lines for gas were mind-boggling. Store shelves were empty. Friends alerted one another when water arrived at stores. I felt I deserved a medal after scoring a loaf of bread, peanut butter, and jelly. My kids don’t even like PBJ! 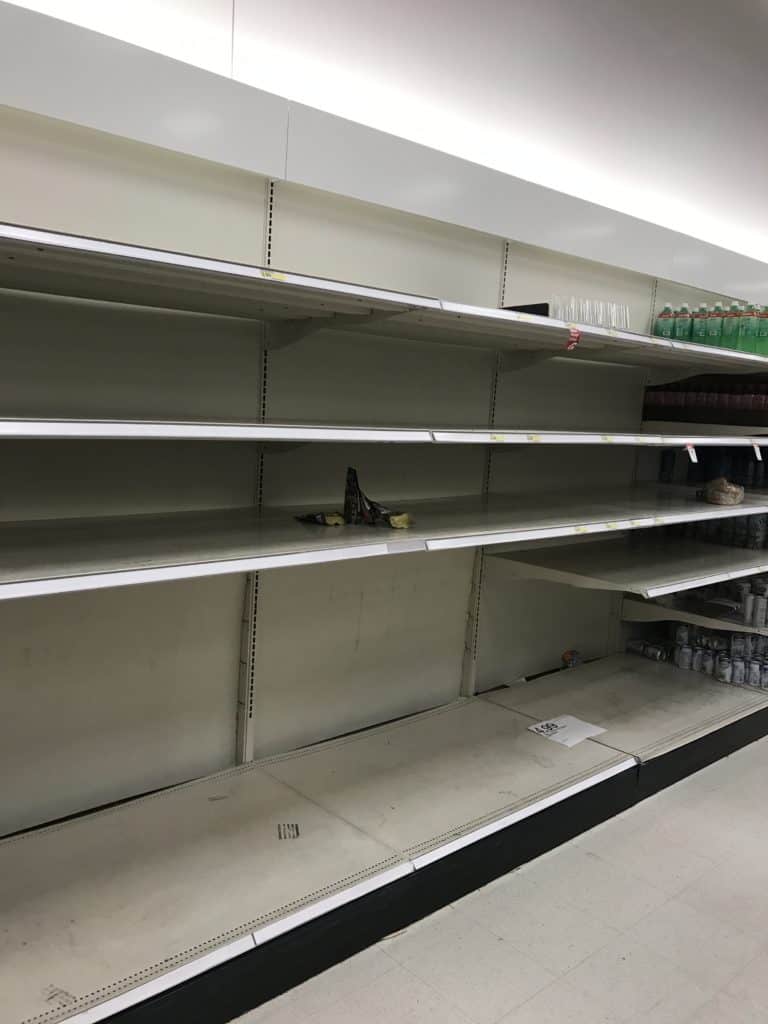 My husband closed the shutters in record time, took all the small plants into the living room and secured any lose items. We decided we would all just pack a carry on bag in case we needed to switch flights. It meant looking closely at what our true essentials were. No room for our wedding album, but we put our photos in a giant plastic bin, sealed it and stored it in the second floor.

My practical side took over, even as I felt the clock ticking.

The day we evacuated was surreal. I choked up as we closed the door to our home. Material things can be replaced, but your home is so much more than a roof over your head. Yet I did not allow myself to break down. It wasn’t the moment to allow emotions take over. My kids were watching me closely so I held everything in.

We split up as a family so we could take care of our own parents. My husband was in charge of my son and mother in law, while my dad would be with my daughter and me.

The airport was as crowded as ever yet we miraculously found a parking spot on a high floor.  The TSA security line was short and all airport personnel went out of their way to be kind. I had never seen so many dogs at Miami International Airport! Some were service dogs, others were beloved pets that their owners had scrambled to get on their flights. When I bought a sandwich and thanked the lady helping me during such a stressful time, she teared up and thanked ME for being kind, because another customer had yelled at her for asking him to repeat his order. I was appalled, yet not surprised.

In times like these you see the best and the worst of people. 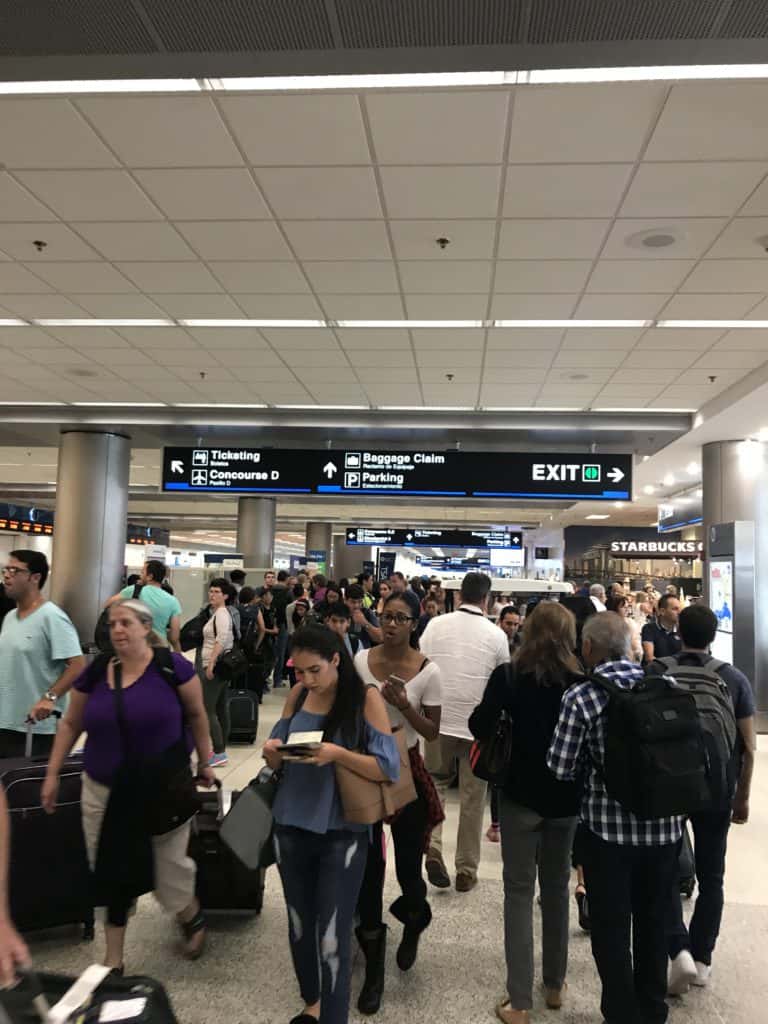 We then waited, waited, and waited for our flight to take off. One delay followed the other and my heart filled with dread. If our flight was cancelled how would I get seats for everybody on other flights? Where could we drive? Watching CNN’s updates did not help, as Irma got stronger and stronger and seemed to be heading directly to Miami.

After a four hour delay, I could feel panic trying to creep in. I shrugged it off.  Another hour crept by, and my kids patiently waited. In typical teen fashion, my son even took a nap. Once we finally boarded and were seated, bottled up emotions brought tears to my eyes. Air space closed for another hour and I would not stop praying. When we got the all clear to take off, I felt my prayers were answered. My daughter reached out for my hand and squeezed it. I felt like crying but again held the tears in. After all, with the relief came the guilt.

Yes, the guilt. Nobody tells you how guilty you feel when you leave. We all do what we can to keep our loved ones safe, but in emergencies like these, even preparing for a hurricane and having a plan to leave feels like being extremely privileged.

Buying supplies is expensive. Having time to prepare is a luxury. Booking tickets to fly anywhere is almost impossible unless you plan before everybody starts panicking. Getting a hotel room in a safer location than your home is like winning the lottery. Even having a car in good condition with a tank full of gas feels like you’re one of the lucky ones. You can clearly feel the division between the haves and have nots, between the planners and the procrastinators, those who are able to prepare, and those who for different reasons, can’t.

Because being able to leave is a luxury in itself. So many people I love did not even have that option. There were sick family members to take care of, pets that they couldn’t leave behind, or other responsibilities that required them to stay. Those first responders, police officers, nurses, firefighters, and doctors that we rely on during troubling times? They all stayed. Just like the journalists and meteorologists did, not for the ratings, but to keep everybody informed.

It goes beyond having money for emergencies like this. Even if you had all the money in the world but waited until the last minute, you couldn’t leave South Florida. Irma was so big and erratic that the entire state was at risk.

In the end, we were spared the worst, while others lost their homes. More guilt kicked in. As we watched the news and checked in with our friends and family who stayed, our anxiety was high. Emotionally, I felt too fragile and again, too guilty as I realized that we were more than okay. A friend helped me gain perspective when she told me that she was happy that we got out and that we should make the most out of our trip to Dallas. She told me enjoying my family did not make me a bad person. After all, I was doing what I thought was best for our family and that I needed to understand I can’t save the world or control Mother Nature.

We knew we were fortunate that we turned our family trip into an unexpected vacation. We looked for familiar places to decrease our feelings of displacement, so we ended up dining at restaurants that we have in Miami. Strangers and friends offered their homes, their food, their help and their kindness. Everything felt like too much.

We also were lucky to be able to return the same day the airport reopened. This isn’t always the case. It surprised me how relieved I was to be able to come back home as planned.

Did we make the right decision? I do feel we did, but it was the right decision for us. I will never say it was the best choice for everybody. The biggest lesson I learned about fleeing a hurricane is that you have to trust yourself to make the best choices for your family, and then act quickly but not hastily. Even if the storm changes its course, which Irma constantly did, know that you did the best you could, when you could, with what you had. That’s what gave me peace of mind.

Special thanks to everybody in Dallas who lent us a hand and to those who kept checking in to see how we were doing.

« Even Picky Eaters Will Love This Colorful Unicorn Toast
How To Seamlessly Keep All Your Photos, Videos And Data Within Reach »